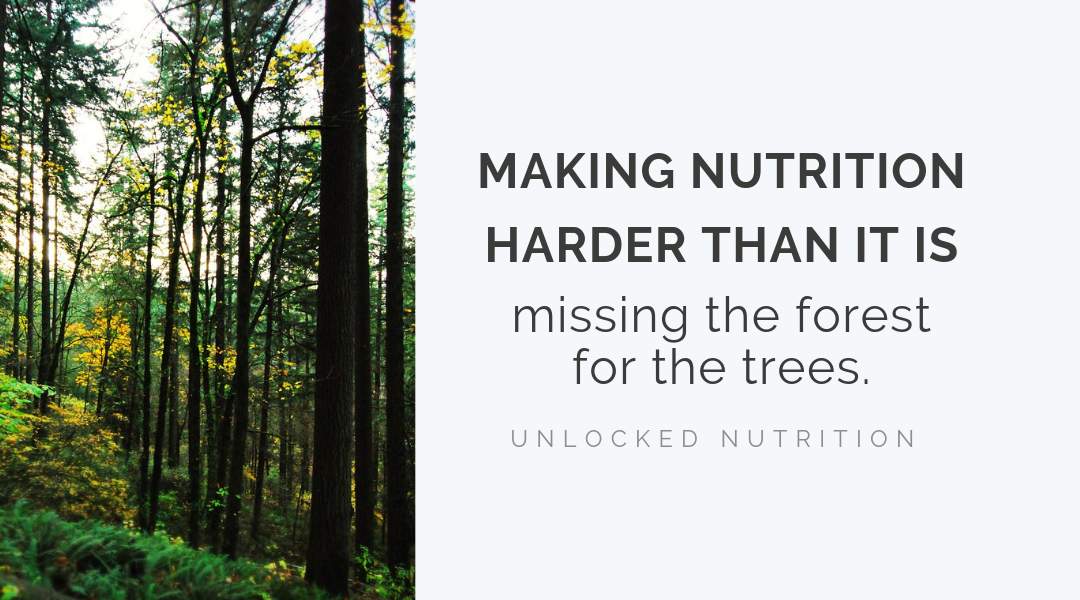 Stop worrying about the small details that overwhelm you and that continue feeding your high-fact, low-execution diet. Implement on the big details. I’ve had clients ask me about whether they should wait to eat their bananas until they have bruises on them because of some article they read about that mentioned them having more cancer-preventing properties when bruised. There was nothing wrong with the client, and I don’t blame them at all for asking. I don’t blame them because this is what the industry has led to for many. People hyper-focused on the details without being able to implement the things that actually have an impact on their health. This person wasn’t eating what most would consider a healthy diet is. Eating fried foods daily and no physical activity, but they were worried about when the proper time was to eat a banana. Again, this was not the fault of the client – but they expected to be told a list of dieting rules because of how we (the western world) have approached nutrition overall – by using rules that don’t work long-term.

I could give you a list of foods that summarize a healthy diet, but everyone pretty much already knows what to eat for a healthy diet. I touched on this in this article. It’s summarized well in this review comparing different diets…

“There have been no rigorous, long-term studies comparing contenders for best diet laurels using methodology that precludes bias and confounding, and for many reasons such studies are unlikely. In the absence of such direct comparisons, claims for the established superiority of any one specific diet over others are exaggerated. The weight of evidence strongly supports a theme of healthful eating while allowing for variations on that theme. A diet of minimally processed foods close to nature, predominantly plants, is decisively associated with health promotion and disease prevention and is consistent with the salient components of seemingly distinct dietary approaches. Efforts to improve public health through diet are forestalled not for want of knowledge about the optimal feeding of Homo sapiens but for distractions associated with exaggerated claims, and our failure to convert what we reliably know into what we routinely do.”

By staying hyper-focused on the tiny details, we miss the opportunity for real change. Change that allows you to have a healthy diet while still living a realistic lifestyle.

Focus on building a relationship with food where you can consistently fuel your body for mental and physical performance while still being able to enjoy food and not feel guilty – A relationship where you choose healthy food most of the time because you respect your body and love the way it makes you feel without triggering your inner rebel. All this takes time, and it takes a coach that will work with you to tackle the bigger issues rather than giving a laundry list of rules.

A transformation to a healthy lifestyle isn’t going to be perfect and it definitely won’t be easy all the time. There are some uncomfortable periods in behavior change, but you don’t have to follow dieting rules and be so scared of doing the wrong thing whenever you can’t/don’t follow specific rules. While it’s challenging to begin, it becomes easy when you get in the hang of things and get over that perfectionistic mindset.